Arches National Park is potentially the most well known park in Utah. Delicate Arch rates top billing on their license place even, so if you have even been behind a Utah car you probably have seen this park. Canyonlands however is potentially not as well known. And yet both of these parks are within easy striking distance of the small university town of Moab. Moab itself is a nice little hub for those outdoors seekers who like a bit more civilization at hand. 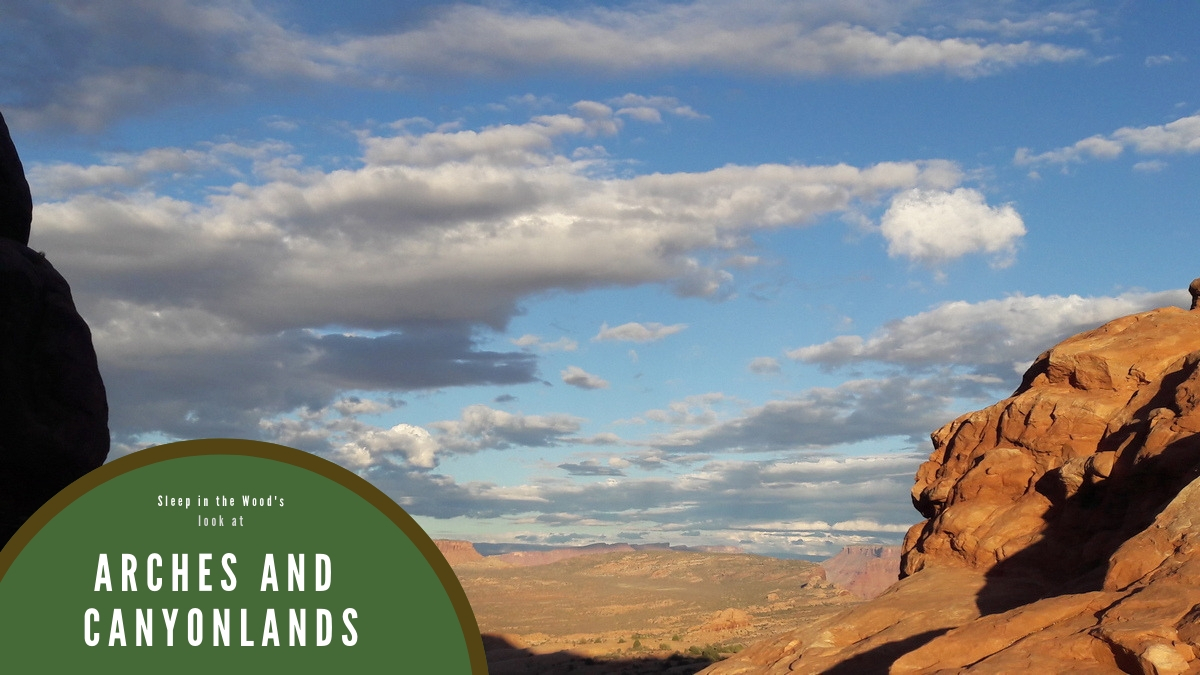 Arches NP is a plateau just across the river from Moab. The visitor center sits in clear view of the main road and hosts a nice flat, well paved, parking lot. The real sights are up the steep road behind the flat boring parking lot, beyond a few switchbacks, up on the plateau.  Be aware that the visitor center closes mid afternoon. It was only a few minutes after 4pm, when we came through, and everything was shut, which was a shame. We didn’t get the little map and pamphlet like at some of the other parks and I had to rely on my tablet map. Lessons learned… get to National Parks before the visitor center closes if at all possible.

Once you get up the steep entry road, the park is pretty easy to navigate. The biggest sights are along one main road with a few spurs. There are plenty of pullouts as well as a few parking lots for the bigger sites.

From an infrastructure point of view, Arches isn’t as developed as some of the other bigger national parks. The visitor center looked nice and there were a few vault toilets scattered at some of the parking lots. Beyond that, there doesn’t seem to be much. There is a campground listed on the website, but it is deep enough in the park that we didn’t see it. Get whatever supplies you need from Moab.

Delicate Arch and the Danger of Rain

Delicate Arch is the most well known sight of the park, and so we wanted to see it. There are two ways to see it. One is a medium to hard hike according to the NP website.  The other option is an easy hike from a different parking lot to an overlook. You can’t get next to the arch from the overlook, but you see it across a bit of distance. I would love to show you pictures of either, but I don’t have any.  We got to the park late and the big hike didn’t feel like something either of us were up to. From everything I had read, there are some steep parts and some scary dropoffs to get around. This didn’t appeal to either of us.

What about the easy hike and overlook, you say? Yeah, I never realized it was even possible to get a hurricane in Arizona and Utah. Well it is. We got to Arches between the rain waves of two of them. The access road to the overlook was washed out, so no Delicate Arch for us. The annoying part was that since we didn’t get to the park on time there was no one at the gate to let us know of the washout. The website did have a notice, but with limited internet on the road we didn’t think to check.

It ain’t called arches for nothing

Being denied Delicate Arch ended up really frustrating us. We knew the rain would be back and we had a nice clear afternoon. So after some gnashing of teeth and tears, we ended up heading back to a turnoff we had passed. This is the Windows section of the park. This is a really great bang for your time area, park once and see several arches.

The windows arches and double arch stare at each other with wide open blue eyes across a small valley filled with a parking lot along with a set of toilets. The double arch walk is barely a quarter mile and super flat. The window arch walk is steeper, but there are steps and also not long hike. We got to be up close to both of these just as the sun was heading toward the horizon.  On the way out we did a few pullouts to get some more sunset pictures. There are in fact several “windows” as well as a named “tower” of rock all in the same area.

Wait, so what about Canyonlands? See the aforementioned rain.  We got one really nice day to see Arches and had rain both days we tried to see Canyonlands NP.  We got a remarkable number of decent pictures between squalls though.

Canyonlands is a plateau west of the main road north of Moab. It takes a good 45 minutes to get from the center of town to the visitor center in the park as the entrance road is quite a ways out of town. There are a few switchbacks on the road, but it wasn’t super scary or steep.  Even before you get to the park edge though, there are a handful of turnouts with some nice views.

The real sight of Canyonlands is the canyons, duh.  So how does this compare to other canyons we have seen? Pretty good in fact. I worried that the canyons would look pretty similar, but these views were very different.  From the tongue of land where the main road is, the rock cliffs go down and then flatten out into a wide lower flat before tumbling down toward the actual river. This gives the place a different feel than Grand Canyon.

Island in the Sky

There are actually three sections of the National Park.  Island in the Sky is the one we went to and the easiest to get to from Moab. It has a visitor center and is accessible from the main highway.  There is the Needles to the south of the huge park. It too is accessible from the highway south of town, but a longer drive. And there is the Maze to the west, which at the least is very difficult to get to from Moab, if not impossible. It was far enough that I didn’t look into it too deeply. Each of these sections is split from each other by the canyon itself, so it is an “either or” situation on the day.

Island in the Sky felt very well visited despite the rain. The visitor center and several of the parking lots had vault toilets, but that was the extent of the infrastructure I saw. The main road from the visitor center leads down to the Grand View at the tip of the plateau where you can see both rivers. A few other stops along the way have good views and one short hike to an arch. A second road leads off from the main road to the west to several other sights. Rain kept us from seeing much beyond just the first view there. 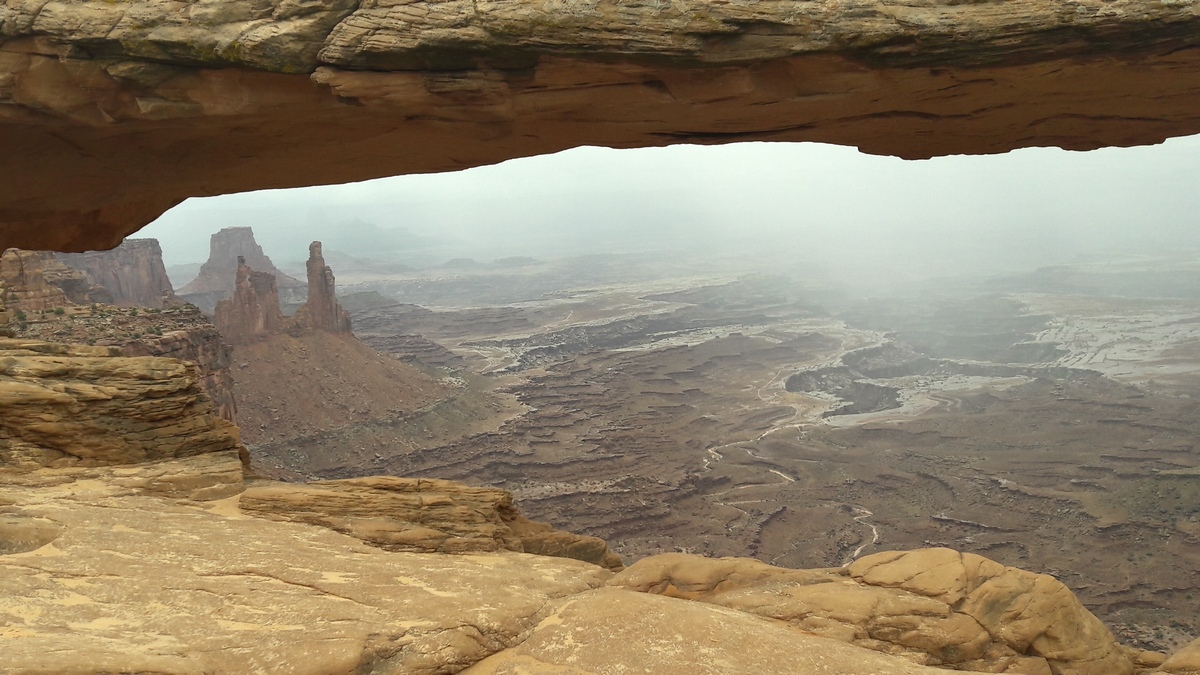 We went back on a second day to see if we could see more. Rain was not super kind either, but we got at least one more view and did make the hike up to see the arch.

Overall our time at Canyonlands was a wash.  Pun intended. We did see some things and it was fun when it wasn’t pouring. I’ve seen pictures from nice days (it’s Utah, it’s supposed to be nice in September) and it really would ahve been a highlihgt park for us if the weather had cooperated.

In the same area as canyonlands, down a turn off just before the ticket hut, lies Dead Horse Point State Park. It is a state park, not a national one if that makes a difference to you. Your parks pass won’t work at it, for one. It is pretty small compared to its larger sibling next door, but is supposed to have some great views of the same wide plains of canyons. Yeah, supposed to… Again rain struck and the road was washed out before we could get to the park gate.

There was a bare moment when your brain thinks “that doesn’t look so deep”. But really we had been watching the news for a few days about the rain and the hazards of driving through water on the road. So we decided not to risk it and made a 29 point turn to head back to Moab. But seriously, if you are in the area don’t forget the tiny park. The views online look great.