Bryce Canyon National Park sits in southwestern Utah, and holds a particularly lofty reputation. Perhaps this is due to it’s proximity to Vegas as well as the spectacular views. The main attraction of Bryce are the forest of hoodoos, vertical spiky rock formations in an orange red hue. Plenty of overlooks and some pretty good infrastructure marks this definitely as a great park to visit. This is our experience at Bryce Canyon National Park. 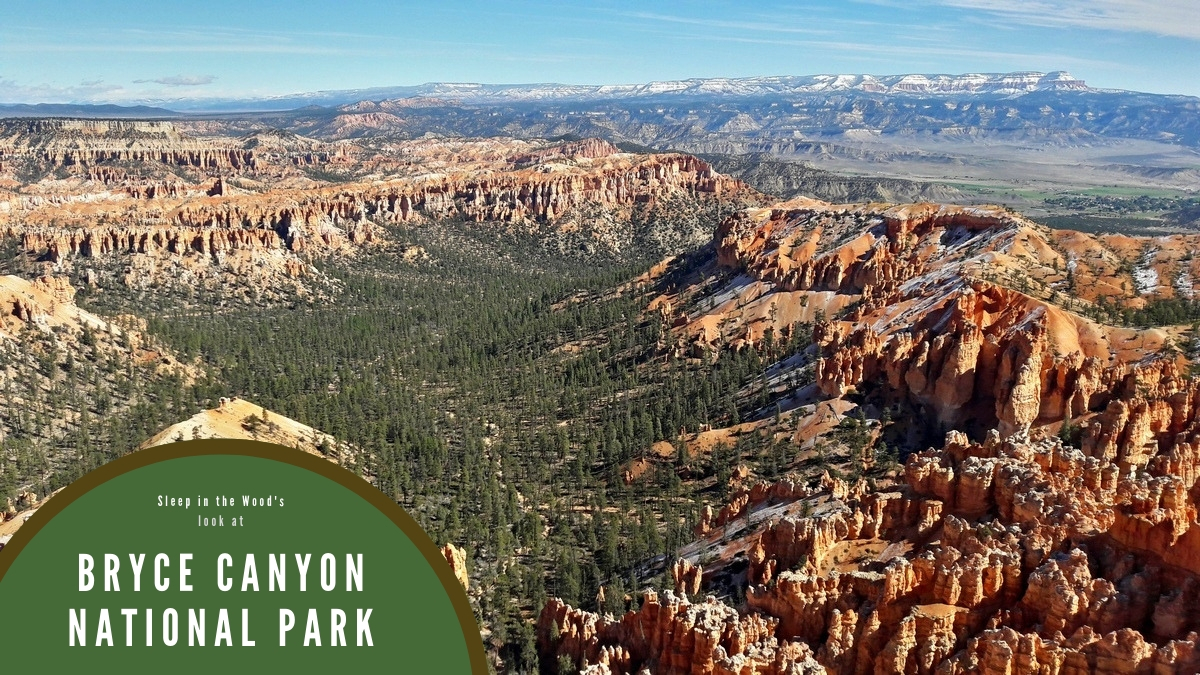 Bryce sits at a pretty high altitude with one of the views at 9000feet, near the highest point of our trip. Late in the season it can get cold and commonly is covered in snow. The hurricanes that dogged us through Page and Moab had indeed dusted the area with snow, but it was mostly gone in the sun by the time we got there. Due to all of this we decided not to camp in our van, but got a hotel room at the nearby town of Tropic. Tropic is the next town to the east on the main road the runs by the park entrance and takes about 20 minutes to drive.

Tropic is quite small. At least from the tourist’s perspective it isn’t much more than a gas station, a store, and a handful of hotels and restaurants. We stayed in a decent motel near the north end of town. The beds were comfortable and the room had a microwave as well as fridge. They offer a free breakfast in the summer, but had extended it in the fall due to the large number of visitors.

We spent two nights here. This gave us a full day at the park.

There are several hotels around the park entrance. Additional towns exist on the highways to the west as well. If you don’t stay right at the park entrance, remember to add the travel time to your calculations and gas needs. Having to drive 20-30 minutes to the park one way will add nearly an hour to your day.

Tropic is an actual town with true residents, as opposed to a dedicated tourist stop. That said, there doesn’t seem to be a ton of food options.

The first night, we went to a newly opened BBQ place across the parking lot from our hotel. According to my online reading, they had once been a food truck in a neighboring town and then moved up to having a fixed abode. Hmmm the decor hasn’t actually upgraded much from the street food roots.

Massive boxes of plastic forks and spoons sit next to a stack of pre-filled disposable cups of sauce. Food was delivered in styrofoam containers, even for sitting on their picnic tables inside. Maybe this is a style they are going for, but it felt far more temporary and way too disposable than I would have liked. It was busy enough, so maybe it’s working. Food-wise it was ok, but not amazing. The meat was cooked fine, but could have been better seasoned. The sides were reasonable, but again a bit uninspiring. Don’t let any of my lukewarm sentiments keep you from trying it. I thought it was fine and totally inoffensive, especially if you happen to bring your own fork and don’t use their plastic.

There was a restaurant attached to the grocery store/gas station. This is not unusual in small towns and didn’t put me off. The menu though was so varied that I could not expect much of it to be very good. Be a burger place or a chicken place or pasta or Mexican, but not all of them. What really put me off was the owner’s apparent attitude in responding to some online reviews on a few of the major sites. Defending frozen and canned food offerings as “we are a small town, you can’t expect fresh.” I have no clue if this is true or not, but it just rubbed me wrong to see that attitude and disrespect of the customers. It was all enough for us to just buy a few cans of soup cheaply at the store and use our microwave as our second night dinner.

The gas station is attached to a grocery store. The store was pretty small, but the offerings were quite diverse. We were staying in a hotel and thus had no real way to cook beyond the microwave, so I didn’t really look at the fresh options. There were several rows of normal canned food as well as the ubiquitous snack aisle and soda/beer fridge.

There were a few other places that showed up on the Google search, but we were only there two nights and didn’t try any others. 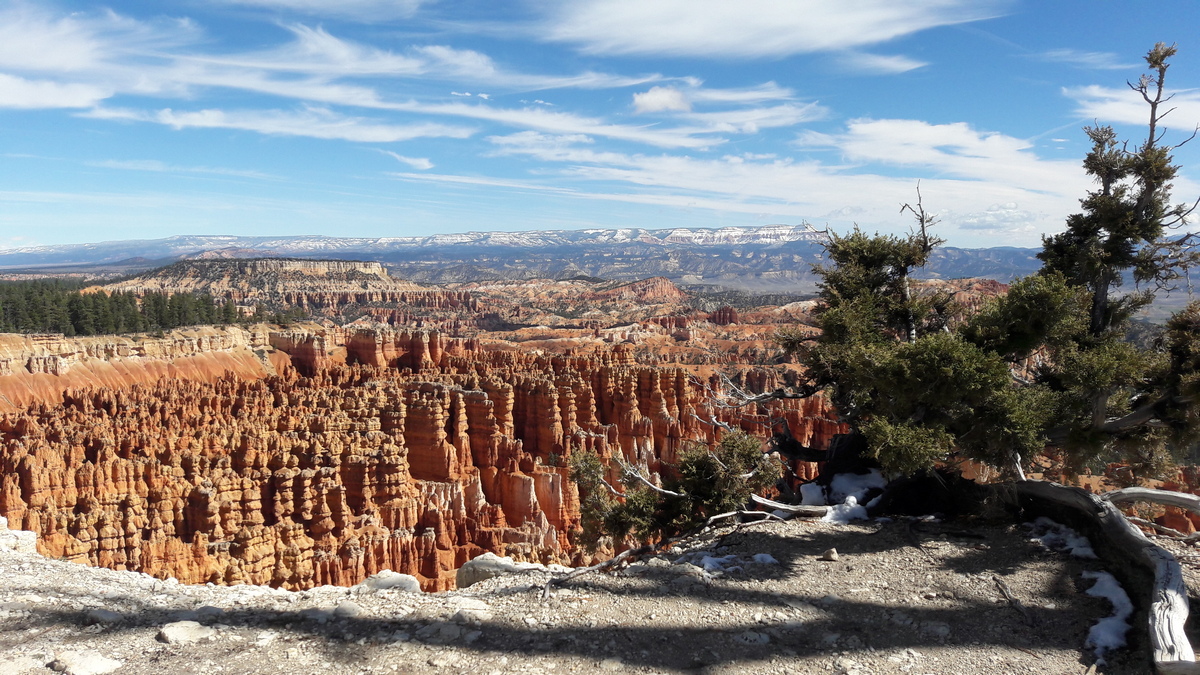 Bryce Canyon National Park, at least the parts we visited, is not a huge park. There are a few campgrounds and a few lodges within the main cluster of buildings. We ended up eating lunch at a small general store which had the normal spread of packaged food as well as some sandwiches in the fridge. Being a general store it had a few grocery style cases and we ended up with a mix of deli meat, cheese, potato chips, and fruit. Enough to feed the hunger beast, but not super filling.

A bus stop away from the General Store is a restaurant. There are more options as you leave the park and head out toward the main highway. It looks a little bit like a mix of a theme park and a convention center, but there are indeed options there.

Overall, food exists and is of reasonable variety. In hindsight, I wish we had tried the restaurant. If you have dietary restrictions try to plan ahead so you either have a picnic with you or give yourself enough time to look around before hunger strikes.

As with most of the popular national parks, there are a ton of people that want to see it and the park designers rightly resist cutting down too much nature just to accommodate parking. This means the parking is a bit scattered and the bus is your way to get around. There is a nice parking lot near the visitor center with signs saying only 1 hour parking. A few larger parking areas lie across the main road. The key then is to move your car and catch the bus.

The bus was quite good. I felt like it came at regular enough intervals that we didn’t feel like we were waiting very long. The loop covers the major overlooks and trail heads in the amphitheater area of the park. Oh and the bus is free.

We didn’t do much in the way of hiking here. Between the cold and the altitude, it felt too strenuous for us. Judge your own capability, but I can saw there is plenty of enjoyment without hiking if you are so inclined.

There however are a lot of options of hiking both above and below the edge of the cliff. The one we actually did walk was the rim trail. This is a trail that leads along the rim of the canyon from one viewpoint to the next. Like at the Grand Canyon, this was a nice walk. It offered an easy walk and a slowly shifting view of the rocks below for a lot of unique pictures. The other hike we were told about, but didn’t do, was a walk between the Sunset and Sunrise viewpoints. Looking down from the viewpoint, we could see a handful of people at different points on the trail and the number of switchbacks to get to the bottom and back up. Supposedly not that hard of a trail, but beyond us at that moment.

See the hoodoos do the hoo they do so well

There are a number of good looking trails, but even without hiking, the views at Bryce are excellent. We visited several viewpoints on the shuttle bus as well as a handful along the long road from the main complex in our own car. The park is several different sections. There is the so-called amphitheater, a bowl shaped rock formation where the hoodoos reside. Beyond that is the Bryce Viewpoint which is separated from the amphitheater by a ridge of rock with arches. Then the park stretches along the cliff side toward Rainbow Point with expansive views east. 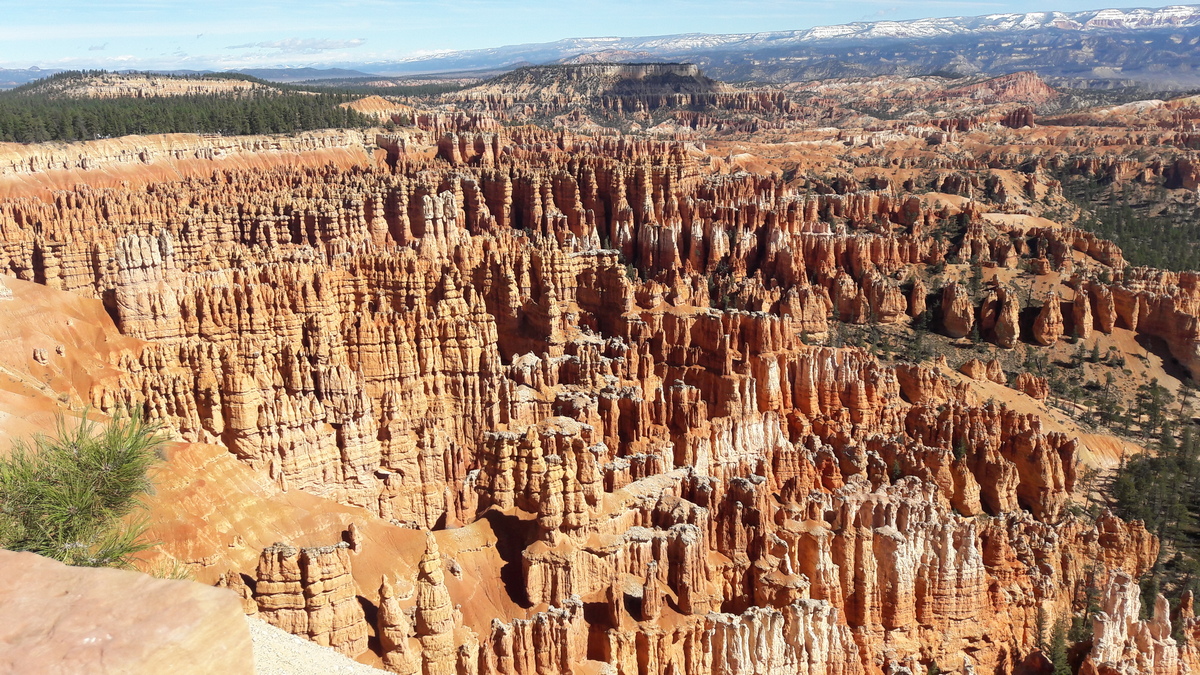 Bryce Viewpoint is the furthest that the shuttle bus goes and at nearly 8000feet we definitely noticed the altitude. There are a few trails leading from the parking lot as well as a large concrete and guard-railed viewpoint out on a tip of rock. This was a great view of that part of the canyon, though not the best view of the hoodoos.

For a better view into the amphitheater and the rows of orange hoodoos, you want Sunset and/or Sunrise points. These are easy to get to from parking and the shuttle bus as well as being near a bathroom hut with flush toilets.

Heading back to our van after the scavenged lunch at the store, we drove out toward Rainbow Point for some different viewpoints with our van. Grand Stairs Escalante Park and the hills of the Dixie National Forest are easy to see in the distance. We had driven through that area from Moab, so it was fun to see where we had come from. Rainbow Point is the end of the road and at 9100 feet marked the highest of our trip. And wow the difference in air and temperature even from Bryce Point a thousand feet down was noticeable.