Leaving Moab, we struck across Utah to the west on our way to Bryce Canyon National Park. Taking highway 24 to the scene highway 12 led us through Capitol Reef National Park, so we stopped for a few sights and a bit of lunch. It is a long thin shaped park following the ridge of the mountains, so the highway we passed along really ignored a lot of the park. The sights we did see were interesting though. Beyond that was the wide Grand Escalante National Monument. This is our experiences of passing through the parks. 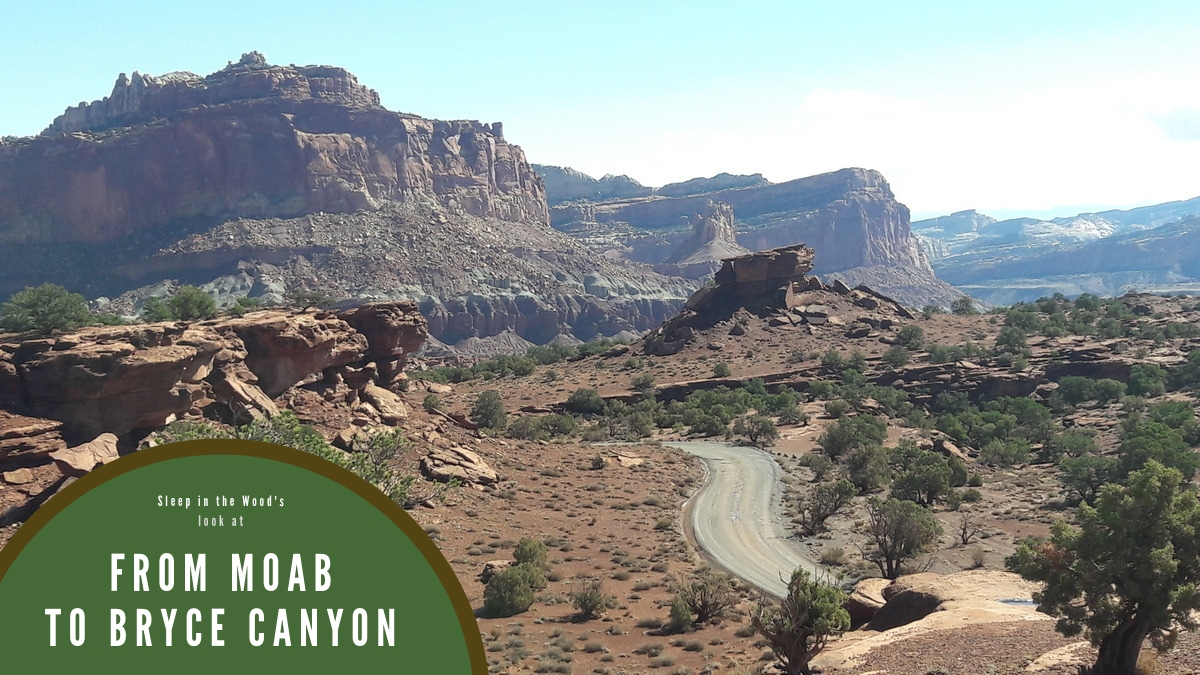 A short jaunt through a long park – Capitol Reef

We didn’t have an overnight stop in Capitol Reef planned. There were already too many parks to see for the time and we were passing through anyway. Because of this, we didn’t really research Capitol Reef National Park. We knew it was here and figured we would see signs to what there was to see.

The visitor center is roughly in the center of the stretch of highway that cuts through the park. So we drove quite a ways beyond what looked like national park worthy scenery to even see a sign for the park boundary. Then more driving to get to the visitor’s center. I don’t even remember seeing a park pass check booth. We certainly didn’t stop at one. The main reason for driving past sights to the visitor center was to get a map of the place (and bathrooms).

If you are more prepared, there are several turnouts and trail heads along the highway to the western side of the park. They looked super popular given the number of cars parked along the road. Once we hit the visitor’s center and got a map, we decided to drive back to see a few things, but didn’t go all the way back to the park entrance.

There are parts of the park that you can get to along what looked like dirt roads, but this highway section was the main touristed bits and what we were up for seeing. There is a paved scenic drive from the visitor’s center, but we didn’t have time for it.

This area was the home to Native Americans around year 500. I remember our guide at Monument Valley talking about this park due to the carvings on the walls here, so I wanted to see them. A short drive back from the visitor center was a pleasant parking lot with wooden walkways along the cliffside.

Above the walkway, high on the cliff, were distinctively man-made carvings, petroglyphs. Although apparently there were more, with a section of the sandstone falling free in the 80’s taking some of the carving with it. Even still it was interesting to see. The little section of the canyon was green and lush compared to dry rocky land we had seen much of along our trip, so it wasn’t a huge stretch to see people wanting to stay here. 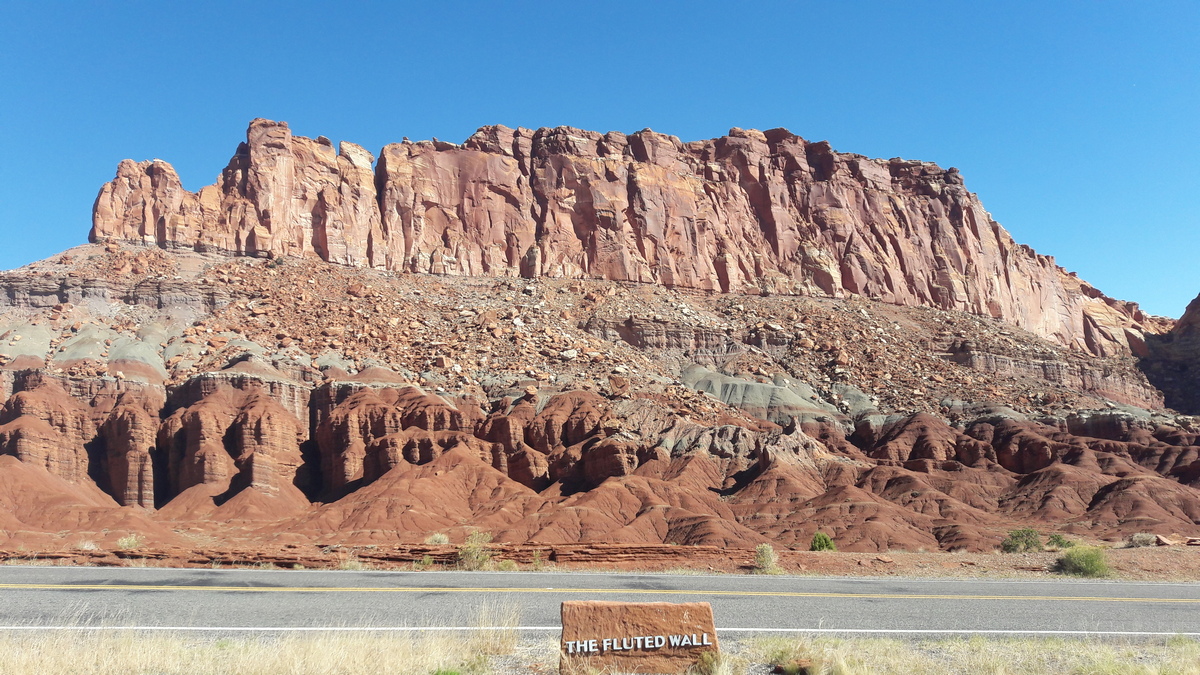 Heading out westward from the visitor center we stopped a few turnouts. One of the interesting ones to me was across from a large rock formation which had its own label. Fluted Wall proclaimed a sign positioned to be photographed from the parking lot with the rock behind.

Beyond that is a short steep road to a roundabout parking area labeled Panorama Point on the map. Panorama’s are always great, so we headed up. There are definitely some nice views from that parking spot. A dirt road extends further across the rocky land offering even better views, but time and hunger constraints as well as a fear of how well the van would fair saw us sitting in the parking lot for lunch.

Beyond Capitol Reef highway 24 heads off toward the big interstate. We though turned down scenic highway 12 toward the eastern entrance to Bryce Canyon. This area is a part of Grand Escalante National Monument and is filled with varied landscapes and some of the steepest roads of our trip. I don’t have pictures as I had to keep my eyes closed more often than not.

One section of the road was a ridge of some sort with steep drops to both sides of the road. Then it begins to climb, so you can’t actually see over the hill of the road ahead and it feels like you are going to drive into the sky, before tipping over the hill to dive into a deep valley that I wasn’t sure we would get out of again. This happened at least twice. My wife was enjoying herself, but I did indeed ride with my eyes closed. In hunting it on the map I find a listing called Hogback, which is mostly likely what I remember,

Another section of the road between the town of Esclante and Heinesville just keeps going up. It winds high in the mountains to get toward the altitude of Bryce. We saw snow in areas and cows in others. There were great groves of yellow leafed aspen trees. I didn’t enjoy the steep roads, but it was a great place for views.

Traveling so much in the same region, I was worried the parks would begin to look similar to each other. Oh look, yet another reddish rock. It was far less of a problem than I was expecting. There were of course similarities between parks, but not much were I would have said I could have skipped a park because I had already seen something elsewhere. Capitol Reef felt like a lot of different parks we had seen without being the same. Tall jagged reddish rocks abounded, but there were sections on the drive that were a deep black rock that almost looked out of place. That was good to see.

As destination oriented as we were on this trip, some stretches of the time really were about the journey and not the endpoint. Our drive through Capitol Reef and Grand Escalante National Monument was a good example of this.