Grand Canyon is a huge national park. Like seriously big, but it kind of has to be to hold the whole canyon. Even still when you think about “visiting the Grand Canyon”, you are probably picturing the visitor center and trails around the South Rim. There is a North Rim with a lodge and a few other places to view the canyon, but the South Rim is the most popular view of the Grand Canyon and has infrastructure to match. We stayed just outside the park in Tusayen for our few days at the canyon. Here are our experiences. 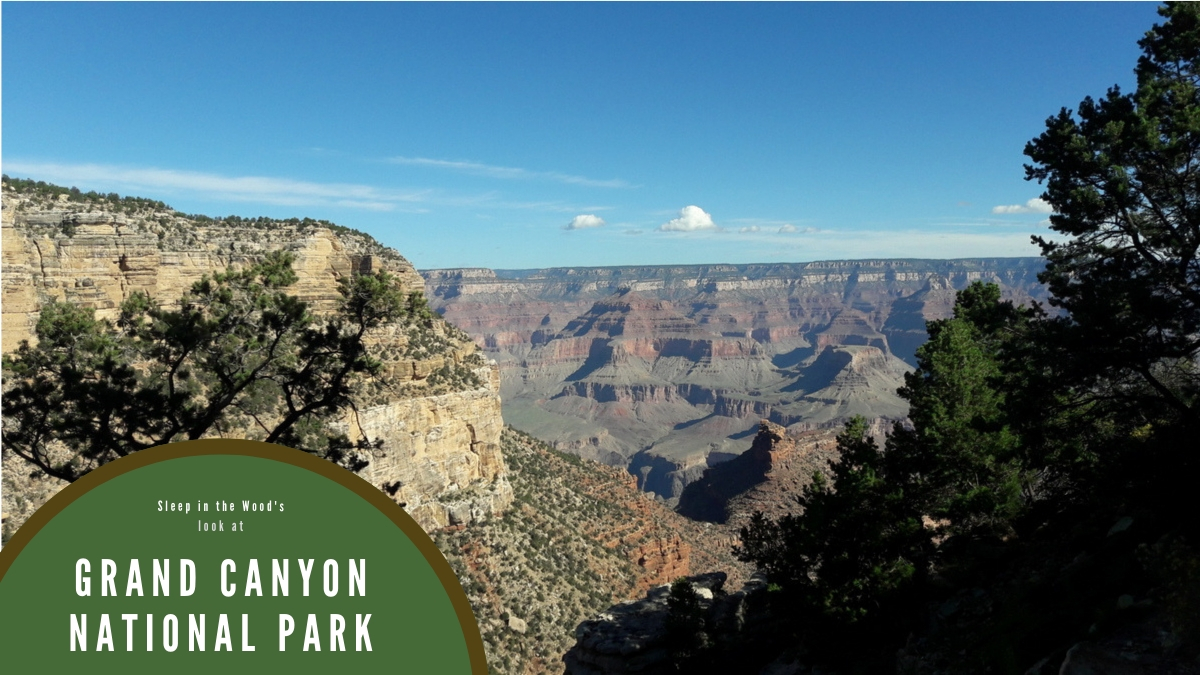 The Grandest of all Canyons (on Earth)

Grand Canyon’s South Rim isn’t just one spot though. There are frequent buses to a bunch of different places along the canyon and there are even more to drive to by yourself. Grand Canyon is definitely in the top of visited parks in the country, but it is nice to see that kind of support for visiting. So maybe not as roughing-it camping sort of destination, but still nature sights of the canyon abound. And if you want to get dirty, there are several hiking trails that go down into the canyon. Just be aware that you do have to hike back out as well.

How many days do you really need in Grand Canyon?

Of course it depends. We spent two full days at the park. Well not super full, since we slept in one morning and didn’t go in until lunchtime, but close enough. This gave us plenty of time to see just about every overlook (check below for our time there) without feeling too rushed. We hiked about 15 minutes of Bright Angel Trail down and then back up, since we heard that most visitors don’t even go below the rim. That was the extent of hiking we did though, so if that is your thing budget more time, of course.

All in, we spent 2 full days at the park. We aren’t great hikers, especially steep trails, but that was plenty of time to see so many overlooks. I can imagine that a nighttime visit would have been amazing, but we didn’t manage it. The hermits rest side and the desert view side each can absorb a good afternoon of time. The center as well, but it is much easier to park and see in the edges around the other sides. Also remember that this needs to be adjusted with how long you are driving to get to the park. Staying in Flagstaff for example is certainly near enough to get to the canyon, but you will lose part of each day in transit.

We chose to stay in a hotel because in September it can get quite cold at night. In the end, we might have been better off in the campground in the park, especially as it wasn’t actually as cold as forecast. The grocery store in the park was quite good and had a sandwich shop in the front. We also had to spend time driving back and forth to town. Not far, but you do have to wait in the entrance line and find a parking space each time. The campground in the park is on the shuttle loop.

There are accommodation options within the park and some outside it. We ended up at a hotel outside the park in Tusayen. I honestly can’t remember why we looked there as opposed to the hotels in the park. I expect we either thought they were too expensive or they didn’t show up in our booking engine and we figured they were full. If they fit your budget, I would totally recommend looking at the hotels in the park. Simply not having to drive in and hunt parking is a huge benefit. Also you are in the park at night, which is supposed to have some amazing star gazing opportunities.

As mentioned above, if you plan to stay further from the park, account for your driving time to and from.

Food Options at the South Rim

Tusayen is the town nearby the park entrance with a bunch of hotels. It however does not feel like much of a lived-in town. There is a nice grocery store with attached Starbucks, but otherwise the food landscape is a bit grim. Along the town highway was a scattering of fast food joints and a handful of places whose decor implied over-the-top theme restaurant. I don’t always trust online reviews, but everything was super low. Like I say, grim.

So our first evening in town, we had been driving for a while from Las Vegas and decided to just stay in our hotel to eat. The hotel bar served obviously frozen and fried up food, alongside pretty poor cocktails. There was a restaurant in the hotel, but it was expensive and I wouldn’t be 100% convinced it was better quality. Ce la vie of traveling.

On later days in and out of town to visit the park, we stopped at the remarkably good grocery store in Tusayen. Selection of beer and snacks was excellent, but also other food options looked pretty good. My recommendation, if you are staying in Tusayen, head to the grocery store and make picnic dinners in your hotel.

From what I saw, the town exists solely as being nearby to the park. There is a shuttle to the park, but we found it much nicer to have the car up in the park if possible. I can imagine in the summer that it is so packed the shuttle is the only choice. 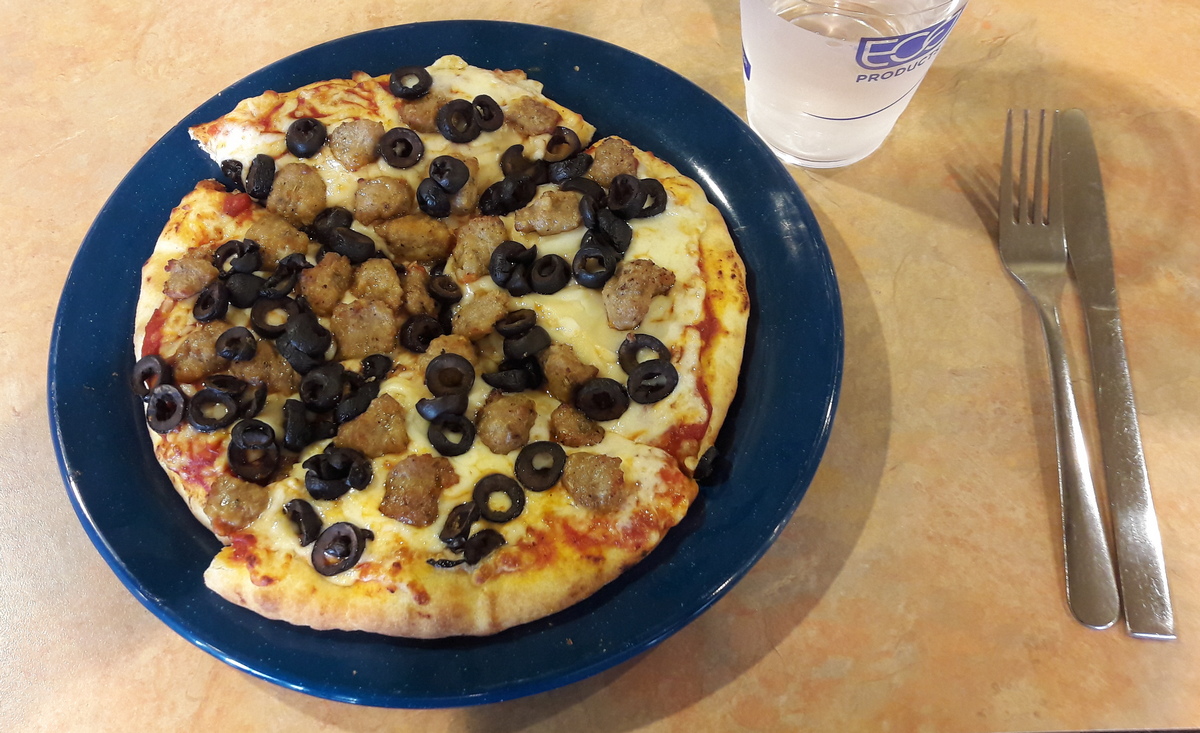 In comparison to the town, the food options in the park itself were pretty good. We ate at the Yavapai Lodge which had several options including a small salad bar and pretty good pizza. Maswick Lodge had a food court which I can imagine had a pretty good selection. I was very impressed with the food options available to visitors at the hotels, especially given our experience at our own hotel in town.

Across the parking lot from Yavapai is a general store / grocery store. This was one of the nicer park stores we saw along our entire trip. It was large with plenty of options, both snacks and “real food” options. Beer selection was decent. In the front of the store off to one side is a sandwich place. They had pre-made sandwiches in a display as well as a menu of fixings to ask them to make your own.

Maybe I should not have been so surprised, given that Grand Canyon is one of the top parks in the country in terms of visitors. But really I was very impressed in the food options within the park.

Getting Around at the South Rim

Despite feeling like the Purple Line to Tusayen would have been a waste, using the other lines within the park was really great. I can see how the Purple Line which goes back and forth to the park from town could be needed in the high season where parking in the park is scarce, but it doesn’t run very often and would have to wait in mostly the same line at the entrance as the cars if it is long. If you can, try to park your vehicle inside the park once and use transport during the day. National Park Info site on Bus Routes here.

The Blue Line loops through the major stops of the hotels, the campground, and parking areas. You can easily get to the canyon at the top of Bright Angel Trail and the super popular Mather Overlook on this line. If you somehow only have a few hours, this is probably the biggest bang for your time. Park your car once and use the bus to get around. Don’t try to move your car too much. Even in September, which is far form high season, parking was challenging at times.

The Orange Line heads to the east of the main cluster of hotels and lookouts and has a handful of stops with overlooks and the Kaibob trailhead. We headed all the way to the end of the loop and got out to see a different view. I was amazed with how different the Canyon looks even going a few miles one direction or the other along the rim. It undulates so much that ridges obscure or reveal sights and views even with just a little movement.

The Red Line (which intersects the Blue Loop at Bright Angel Trail) heads toward Hermits Rest. This was a really neat afternoon of hopping on and off the shuttle. There are 9 stops in one direction and only a few back toward the park, so it is worth getting off the bus early and just grabbing the next one. Most of the overlooks are about a mile from each other (some less, some more) and are connected by the Rim Trail. We decided to walk one stretch and pick the bus up at the next overlook. That was one of our best days of the entire trip. It was much quieter than the overlooks, and although not at all deserted, we had long moments were there were no people or sound of any type other than the wind. If you can hike at all, I highly recommend doing those walks. Be aware of which stretches are just tamped dirt and which are paved. I had a few moments of vertigo looking into the canyon, but otherwise fine.

Hermit’s Rest is several miles to the west of the main cluster of hotels. At the other end of this part of the park is Desert View, nearly 25 miles to the east. There aren’t shuttles, but the drive is pleasant. Desert View has a parking lot and a tower with a viewing platform (although when we were there only the second story one was open, not the top). The views from here are where the canyon bends toward the north from its mostly east-west run. The river hasn’t dropped so deep and you can see so much on the horizon.

This was totally worth doing. It of course requires a car, but you aren’t getting to the Grand Canyon without one, right? As you drive back toward the park, there are a handful of overlooks with parking.