Moab, Utah as a Camper

I had never heard of Moab, Utah before planning this trip. Even looking it up on a map shows a little dot in southeastern Utah. What is really known about Moab isn’t in town, but nearby in the parks of Arches and Canyonlands. Now Arches National Park I HAD heard of. Monument Valley definitely has those Western style backgrounds, but Arches is pretty popular too in my head of old movies. Moab though is an experience of it’s own and this post is about our experiences around the town itself. 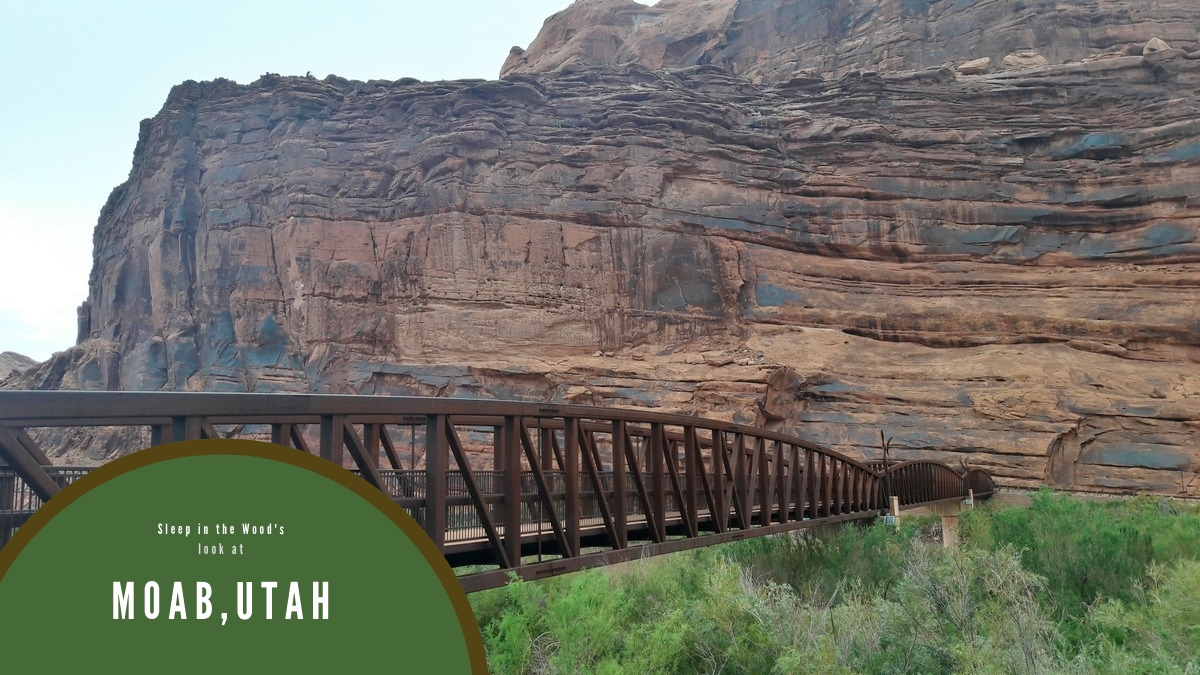 We stayed for one night at the Koa Park just south of Moab on the main highway. Due to some flexibility in our plan, we ended up with one day unaccounted for and decided to spend it in Moab as a city instead of another nature park. (The urbanite urges were strong at the time.)

Some bad weather haunted us through our planned days in Moab, so the bonus day here was wonderful since we got a nice blue sky day at Arches. Our prearranged campground for the rest of the days was already full, so we made a last minute reservation at the KOA. It was a good decision. There are plenty of camping and hotel options along the main road through town. In our more urban travelings, we tend toward picking places closer to the center for easy walking. Parking can be a problem in smaller places like this. Review your needs as you choose a place to stay.

KOA is a nationwide chain of campgrounds. I remember them from a camping as a kid, but they seem to have kept up with the times. The website is pretty good and amenities (at this particular campground anyway) were great. Our spot was nicely flat for the van and had a stretched sun shield over where a tent would go. Tiny blue lights line the roads to help you find your way for that midnight run to the bathroom. Wifi reached our spot easily. (Wifi at a campground!) The bathroom situation was probably the best of our entire trip of camping.

This is definitely more of an urban campground setting. There are trees between the spots, but small ones. Not like the towering trees from Kings Canyon or Yosemite.

Just a few steps from our spot was a huddling of two buildings, each with a few individual bathrooms so 6 total for our end of the campground. Each had a toilet and a private shower along with a sink including soap and hot water. I can imagine in the high season those handful of bathrooms wouldn’t keep up with the people, especially if a lot of people were taking showers. I only had to wait once during our single night stay. The outside of one building had a nice spot to wash dishes too, again with hot water.

There was even a pool and the general store wasn’t bad looking, although certainly small on the food side. The park is far enough from the center of town that you probably wouldn’t want to walk, so the options were nice. I would totally stay there again if were doign camping in the area again.

Who knew that Arizona and Utah are int he line to get hurricanes from the pacific side? Seriously? Apparently it happens often enough, but we had planned for warm and dry on this trip. We got neither on our days in Moab. We had booked a few nights at the Canyonlands RV Resort in order to see the local parks. It was so cold and wet on our morning waking up at the KOA that we bailed on that reservation and ended up in a hotel. Even still the campground looked really nice.

The website showed plenty of nice amenities and location wise it was close enough to town to walk across the busy highway to a grocery store and several restaurants. If you want a place more central check it out on their site.

We probably should have only booked the hotel one night at a time as it wasn’t great and we probably could have gone back to camping after the rain let up on the second day.

Lions Park and a drive up the Colorado River

The Colorado River is a long winding thing, which I knew. What I hadn’t expected was that so many of the places we visited would cross it. Famous for cutting the Grand Canyon, we saw the river again in Page, AZ, and again here in Moab. It is smaller river here, but still interesting and the namesake red color was very evident. The Colorado River crosses the main highway just north of town in a small square of green space labeled Lions Park. The small parking lot has a fancy bridge that crosses the river and is the head of several trails along the river. 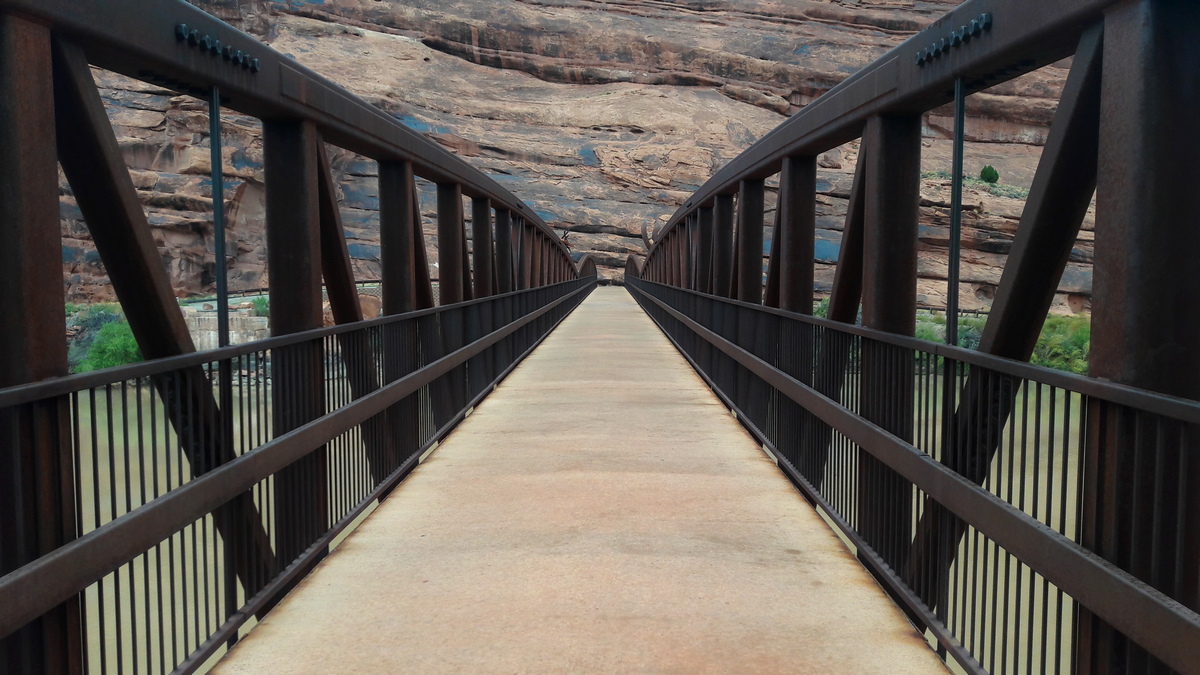 We were told by someone on our Monument Valley tour that they saw waterfalls seeping from the rocks during the heavy rains of the week previous. We stopped several times at the park and didn’t see anything.

If you turn off the main highway at Lions Park and continue along the river, you end up in a wide canyon with a number of turnouts. We stopped once to see a small waterfall and a few other times to see dramatic views. According to signs, there are hiking routes among the hills here and we saw other more basic campgrounds (as opposed to the commonly called “Resort Campgrounds” in town). If you have plenty of time in this area and are done with the main parks, check out this leg of road.

Moab is a university town that sees a lot of tourists due to the proximity of two National Parks and so many other interesting outdoor activities. This means the town has some legs beyond just the daytripper passthrough tourist crowd.

There are two grocery stores in town. The City Market is closed to the center and is pretty large. We had no problem buying the food and supplies we needed. The deli side of the store was a grand thing too. Made to order sandwiches, a small hot bar, and prepared food in a case. You just have to walk by the large case of pick-a-mix donuts unscathed.

The second grocery store is called the Village Market and is just down the parking lot from the Moab Brewery (see below for more). As a village is smaller than a city, this is smaller than the other grocery store. We saw more specialty things in the deli and prepared foods side of things (like gluten-free cookies and muffins). And yet, while we found cold almond milk, we couldn’t get the kind that is ok without a fridge until you open it. Not a big deal, but an odd oversight perhaps. This is the store easily walkable from the RV Resort Campground.

If you are camping and want to prepare your own food, there are plenty of supplies to be had in town. That said, there are also a lot of restaurants. Here are a few we tried.

Look up anything about Moab as a town and its food landscape, and you will definitely run into mention of the Moab Brewery. This being Utah, with some pretty limiting alcohol laws, this is a thing to see, so we wanted to go, of course. Yeah, it is seriously popular. We waited 45 minutes the first night for our table, but it was worth it. We enjoyed it enough that we went a second time for lunch. Still a wait, but not a huge one.

The food menu is large and varied and the dishes we had were good. I had poutine one night, because how often do you see that on a menu? It was indeed tasty, but probably not as good as I have had in Berlin. Not being Canadian myself, I guess I can’t truly judge. On the second night, I had some great beer cheese soup and a block of jalapeno cornbeard. All of it was tasty. So what about the beer, you say?? I tried a few of their house brews, all very drinkable although more hopped than I like. The best thing was probably the homemade root beer though. Not alcoholic, but very tasty. They even do a cocktail with that rootbeer and some vanilla vodka.

It was definitely a crowded place, but worth the attention it gets. Excellent service and good food, though bring your patience.

Across the street from the Brewery sits the Blu Pig in a freestanding building with the namesake azure swine on the sign. We wanted to try a few other places in town and so headed here one night. There are two doors. One into a “restaurant” and one into a “bar” area. We went into the restaurant and were told it would be a 30 minute wait or we can hunt a free table in the bar area, which we were assured had the same menu. Sure, food now is usually better than waiting. We found a table in the small crowded room and sat down. This side of things has several TVs, a bar with stools, and most notably a stage with live music (apparently every night).

The beer menu was extensive. Bigger in fact than the one at the Brewery, as the Blu Pig offered beers from around Utah in addition to some international and national offerings. I finally got to try the oddly named “Poligamy Porter”, which had been on my to-drink list. Actually I had the “nitro” version which is 6% instead of the pretty tame 4% that Utah seems to enforce. I quite enjoyed that beer.

We ordered a large mix plate of pulled pork and some sides to split. Plenty of food for both of us and a nice set of flavors. Definitely the same food menu I had expected on the restaurant side. And as I went to the bathroom, I heard someone asking questions and I suspect the restaurant side did not have the same drinks menu. So overall a big reason to hunt the bar side of the pig.

As mentioned our wonderfully dry, sunny, and warm planned trip had become quite wet and dreary. This drove us to eat inside more than we might have if we were up looking at the parks during the day or cooking at our campground. It did however lead us to Sweet Cravings. This is a cafe on the north side of Moab. A high ceiling and whimsically kitschy decoration with plenty of tables, the cafe was quite welcoming. What drew me though, was two things. A listing on their website that they give little deserts with each sandwich meal and they have gluten free offerings. 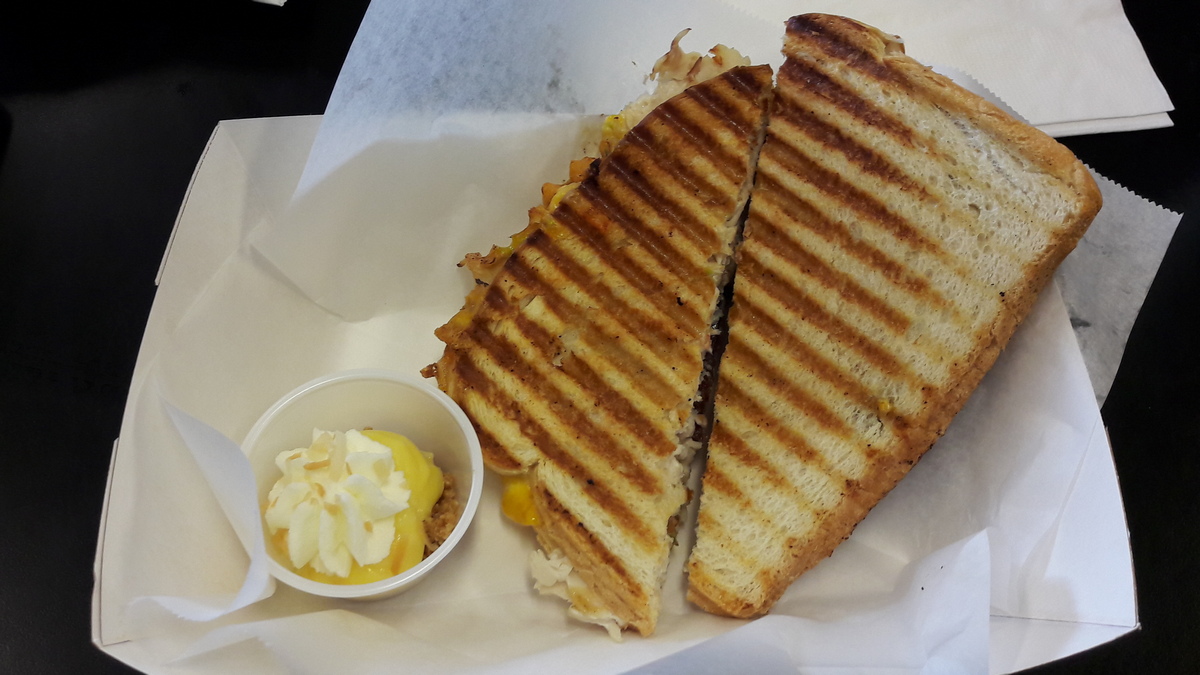 The cafe was really good. Ali ordered her sandwich and talked through all of her dietary issues with the woman at the counter, who was very helpful. I got a small cup of pie with my sandwich. It is only open until mid afternoon, but with free wifi it made a nice morning and lunch place out of the rain.

The center of Moab along the main street had plenty of other cafe’s and eateries. The rain really dampened our ability to explore it, which is a shame. There were plenty of places that looked quite fun to enjoy after a day of hiking in the parks.