I had never heard of Page, AZ before we planned this trip. It is however home to Antelope Canyon, which I had heard of. There is also a really famous overlook of a horseshoe curve in the Colorado River. The town is near Glen Canyon, which feeds over a similarly named dam from Lake Powell. The lake offers a fair amount of things to do with boating and trails, so overall quite a bit of stuff to do in this area. I went in without any expectations and these are our experiences. 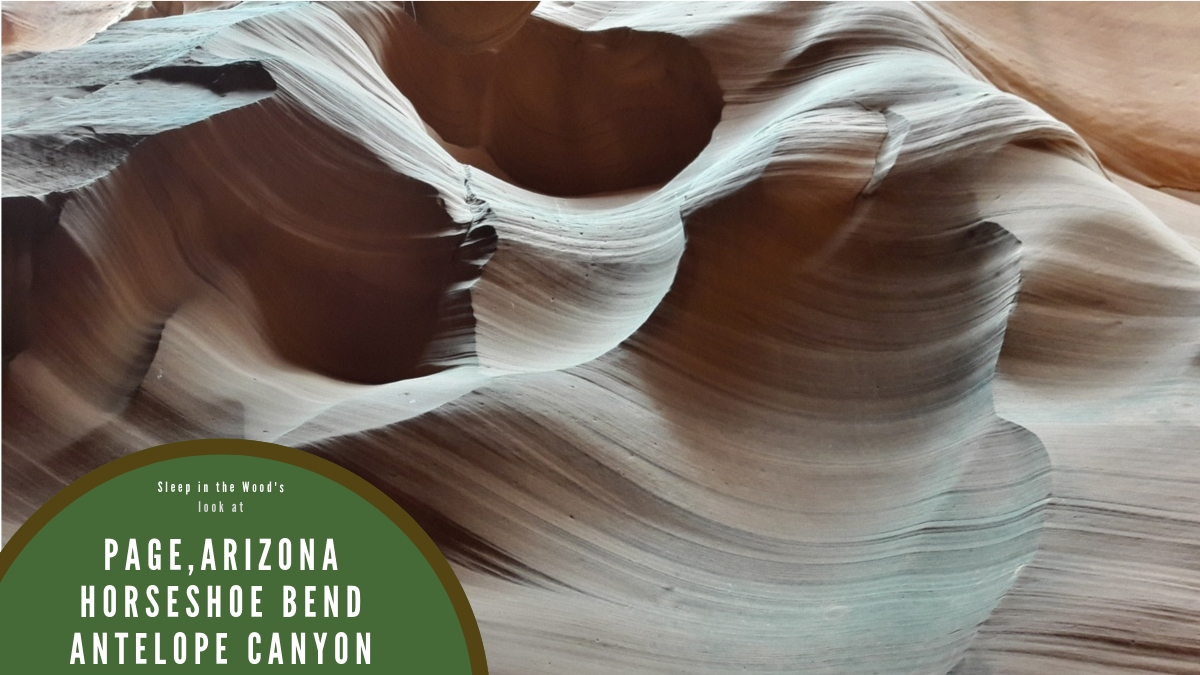 We stayed in the Wahweap Campground on the shores of Lake Powell in Glen Canyon National Park, which was about 10 minutes from Page over the dam and into the park. The road into the park has several overlooks of the lake and the distant Navajoes Mountain. Nice shades cover the benches too, to protect from the hot Arizona sun. No one was checking, but we had our park pass, so it was free entrance to the park. The campground is however run by a private company and pretty good. The check-in desk was in the main building in the little store. Next to that was the laundry room and shower area. Our spot was on a loop up the hill from the entrance and had a great view of the lake.

We had a reservation and so were assigned a spot upon arrival. When we went to park in it, the tent spot was perfectly fine, but the car park was pretty slanted. Enough that I couldn’t keep the sliding door open. We did some eye’ing around and picked a spot we liked without anyone in it. Then we went back to the front and asked nicely to switch, which the pleasant woman did for us. Our new spot was still a bit slanted, but better. 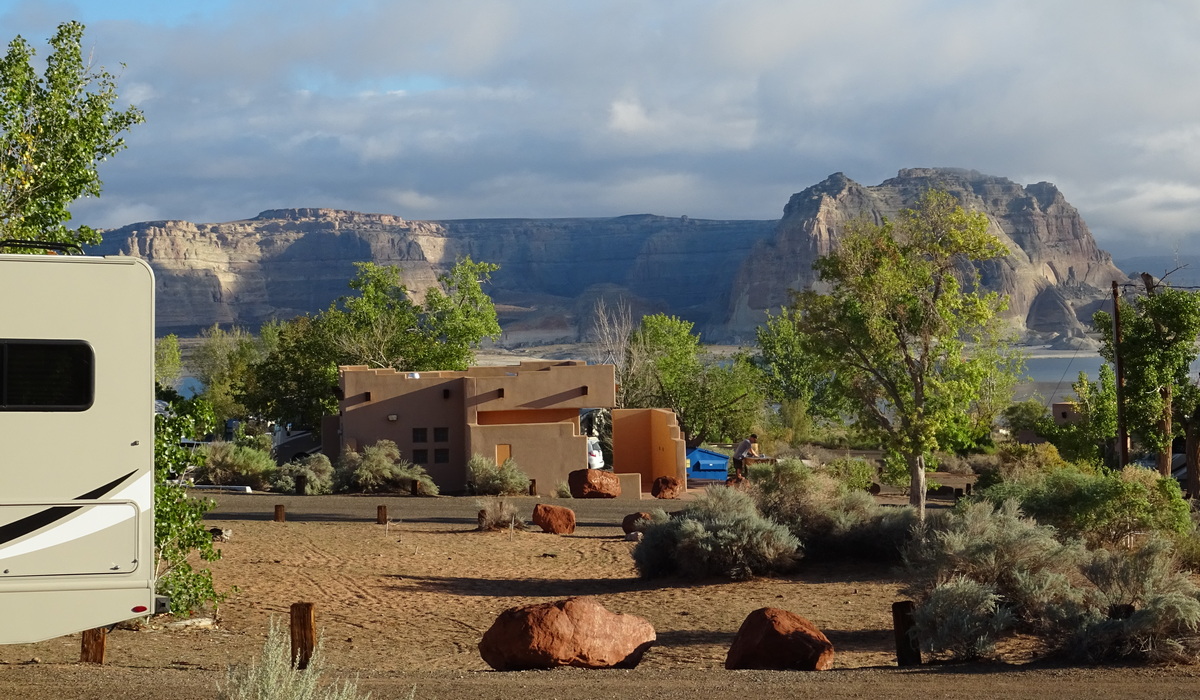 This was not bear country ( barely rabbit country) so we didn’t have to deal with a bear box. Yay. The spot wasn’t huge, but with our van it was fine. There were a lot of RV’s around and their pull through spots looked decent as well. The bathrooms were just a short walk around the loop road. They had power, good lighting, and soap. Yay civilization. There was also an outside sink and counter for washing dishes. We learned that walking with the dishes to use running water was much nicer than using the pump in our own sink.

Showers in the main building were pretty decent. Each stall was separated from the main bathroom with a door and then had a dressing area with a sat and a hook which was separated from the shower by a curtain. The showers ran on quarters, so you had to get change in the laundry room and dump a handful in one at a time to get it to trigger, but oh well it did work. Two large rooms, one per gender and a handful of individual bathrooms with their own showers made it not a bad place to wash up. Bring your own towel though.

Sitting at the nearby hotel for wi-fi

This being a nice flat area nearly devoid of trees and near a highway, there was more development on the edge of the lake than we had seen in the more remote mountain parks. A nice hotel sat on the lake’s edge not far from the campground. The lobby is large with a coffee corner and a handful of pretty cushy seats, oh and Wi-Fi (free and open). And to cap it all off, super nice bathrooms. Next to the lobby is a nice little bar and a pretty expensive looking restaurant. Since it had the same name as our campground, we took full advantage of sitting there during the rainstorms we experienced.

The downfall of all of these modern conveniences was that it was also a stopping point for tour buses. Like, lots of them. So every hour or so several hundred people in various states of boredom, tiredness, or hunger flooded the lobby. They were informed about some boat tour or other and given various color tickets to assist in their herding. We got to then experience so many people crammed on so few chairs all staring at their phone or complaining loudly in various languages. Meh, there was free wifi, nice bathrooms, and we are good at defending our seats.

The campground store itself had not much more than a gas station would. The hotel was better provisioned. We ate at the bar once and it was pretty good. Prices were what you might expect for a hotel bar. For more food options, just head into Page. It is not huge, but Page, AZ is a pretty decent sized town able to supply itself. There is a Safeway near the center with a pretty good sandwich deli and a pixk-a-mix chicken wing bar. The town of course has plenty of restaurants to choose from.

This was a pretty good set up for the urban camper. Good campground, not far from a town with services and full size grocery stores, and plenty of things to do in the area.

A sign points from the main highway toward a short drive to a large dirt parking lot. A little bit of construction hints that this might at some point be more developed, but the number of cars flooding the area definitely shows how popular the Horseshoe Bend overlook is already. Buses disgorge their passengers and drive away to park elsewhere. I cringed at the memories of cramming into the concrete overlooks at Grand Canyon, but we were parked and had an hour until our Antelope Canyon tour. A large hill sloped up away from the parking lot. It was steep, but didn’t look too long. 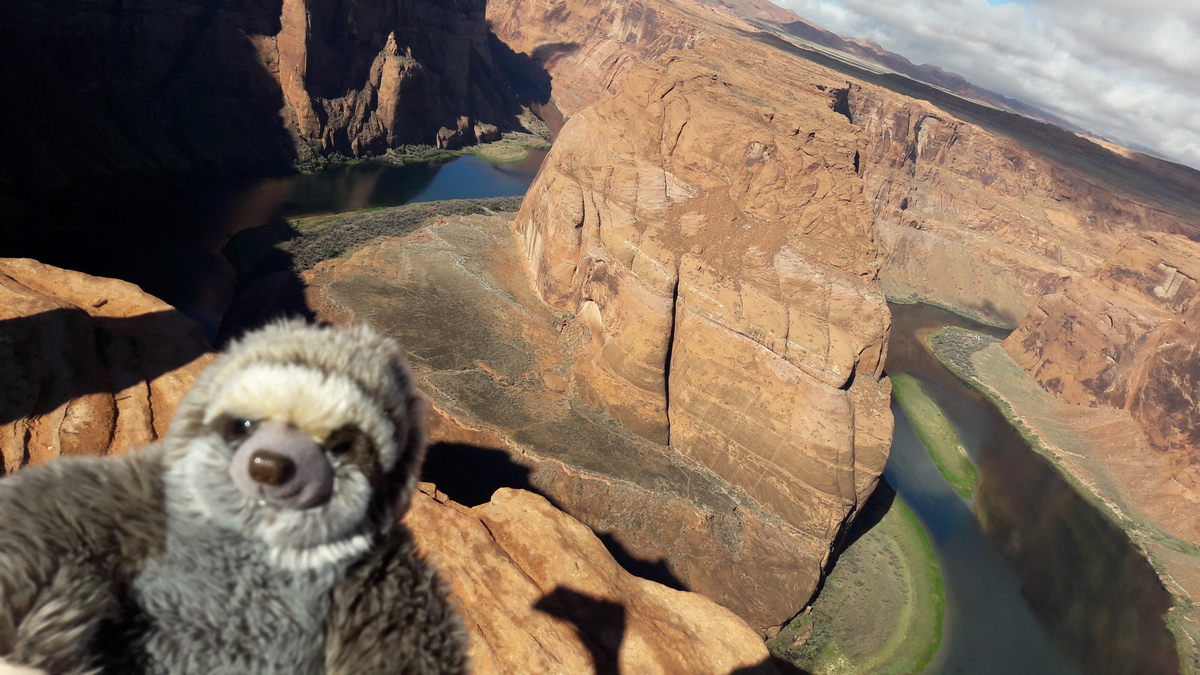 After a few minutes of slogging, we crested the hill to see a huge sweeping vista and long slope of a hill toward the distant overlook. This was a lot longer walk than we had anticipated and although down on the way there, it would be steep returning. On the good side, the overlook was much more free form, with just a verge of rock with people crawling around in either direction. We wouldn’t have a problem getting a spot at the edge between hordes of selfie makers.

The view itself is indeed nice. The Colorado River is in a canyon here just like much further south, but not as deep. Here it also make some dramatic bends producing the view. There are a lot of people, but they were spread out. It is a walk up and down a hill in both directions, but still worth it. It looks like they are working on some paved switchbacks, but no where near done in fall of 2018, when we were there.

Antelope Canyon and the Problem of Over-Touristing

I expect most people have heard of Antelope Canyon, or at the very least recognize the iconic pictures. Sandstone in rich golden brown and red undulate like water up the picture and shafts of angelically pure sunlight angle into the slot canyon. This is the instagram style picture that so many people want to get when they come to Antelope Canyon. So many in fact that it gets super crowded, deep in a slot canyon. Crowded enough that is sounds miserable to me. 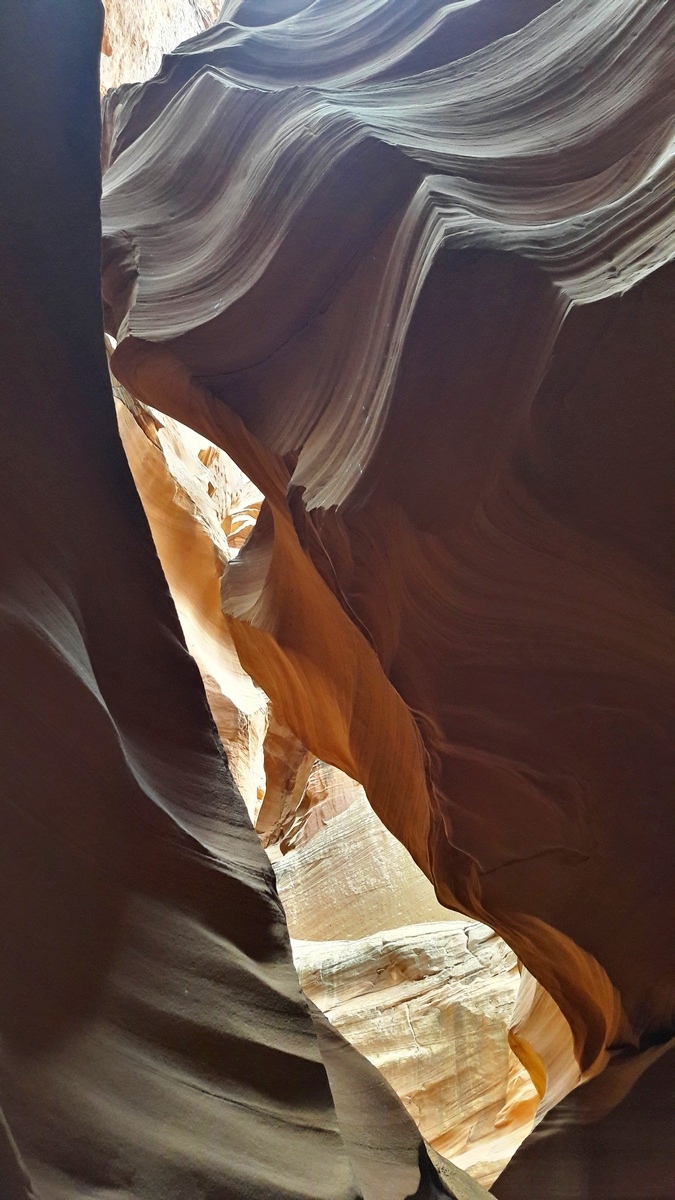 The two well known canyons are creatively named Upper and Lower Antelope Canyon. We had read horror stories of 300 people in a canyon at a time and guides pushing you to keep moving. And really those rays of light are only at specific days in the year for a short amount of time. While Upper and Lower Canyons are near the main road and most well known, there are other options.

Antelope Wash is a network of slot canyons and wide open ditches that drain a region near Page into the lake. Peculiarities in how the sandstone was formed mixed with periodic flashfloods create the smooth rolling rock walls. We knew that the whole region had slot canyons, so we looked wider than the most famous places.

And we found something called Canyon X. It is further out from Page and only run by one company, but the canyon is still a part of the Antelope Wash network, so it definitely still counted to us as an Antelope Canyon. Best of all, they did smaller groups. Our tour was two minivans full, so maybe 15 people. We got to see two different canyons and I didn’t feel rushed at all. Our guide was helpful and friendly, even gave camera advice and told us stories of the region and the canyons. 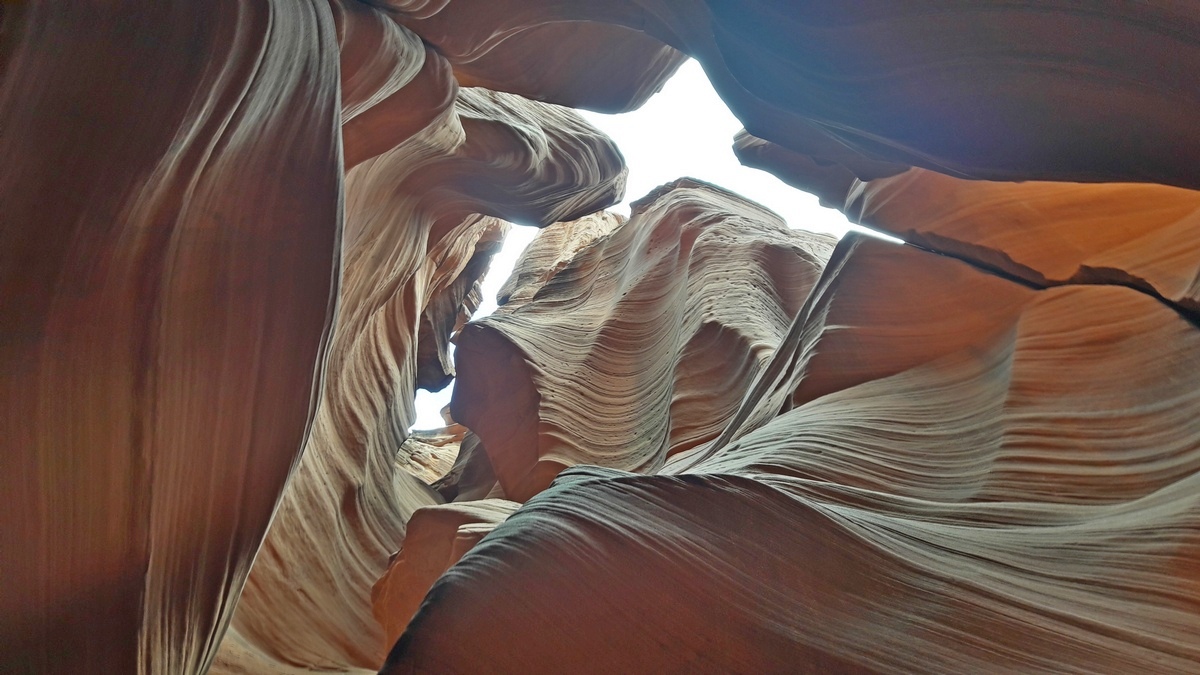 Canyon X is a 10 minute bouncy ride in vans from the highway and then a steep hot walk down into the canyon, where the shade was cool. I brought my water bottle, but they provided coolers and I wish I had left it. Like most companies they did not allow any bags on your person in the canyon. Having the water bottle made using my camera more difficult and I could have just picked up a water for my walk up the slope. That is quite a walk up the slope, but worth it.

Of course we didn’t get those exact pictures you might have seen on social media, but I didn’t care. The same natural forces created the canyon we were in and it was still amazingly beautiful. Every angle was different and attractive. Rock swirled around us in a never moving dance. Rich colors changed as the sun far above passed behind clouds and as it moved ever so slightly during our hour in the canyon. I had been a bit worried that this would be a sub par canyon, but I truly enjoyed my time. 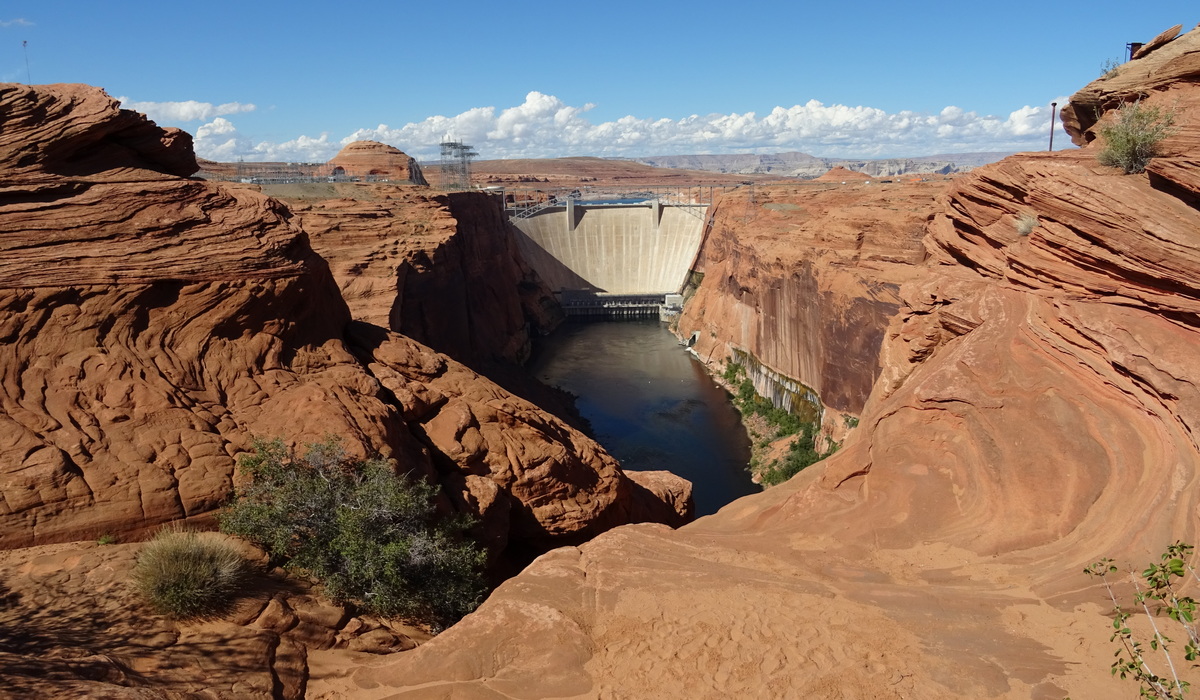 Lake Powell is formed by the Glen Canyon Dam, at the top of, you guessed it, Glen Canyon. The Colorado River leads out of this dam and heads down the canyon toward the Grand Canyon. This part of the canyon system contains the Horseshoe Bend a few miles to the south. So there is a visitor center at the dam with a parking lot that gives you views of the dam and a convenient place to walk across the bridge above the dam. There is also an overlook that gives you a great view of the dam and the striated cliffs of the river below.

From the main highway there is a turnoff to well-named Scenic View Drive, which loops off toward the river. A turn from here leads down to a parking lot. The views from the little hut there are pretty good, but if you head down the quite steep mostly natural rock path there is another viewing point near the edge of the river that has even better views. If Canyon X is the lesser known Antelope Canyon, this overlook is like the lesser known Horseshoe Bend.