Picking an LED Lantern for Camping

When I was a kid, our camp lantern was a kerosene powered thing. You had to carefully tie on little fabric things called “mantles” and fill the tank with fuel. Then there was a fancy dance of knobs, switches, and a button with a background of soft swearing into the darkening woods to get it to light. Oh it was super bright, but had a very soft whoosh hum of the burning gas. Technology moves on and now many camping lanterns are electric and turn on easily. I knew it would be dark in the woods during our trip, so I set about buying us a lantern. This is my guide to the research I did toward that decision. 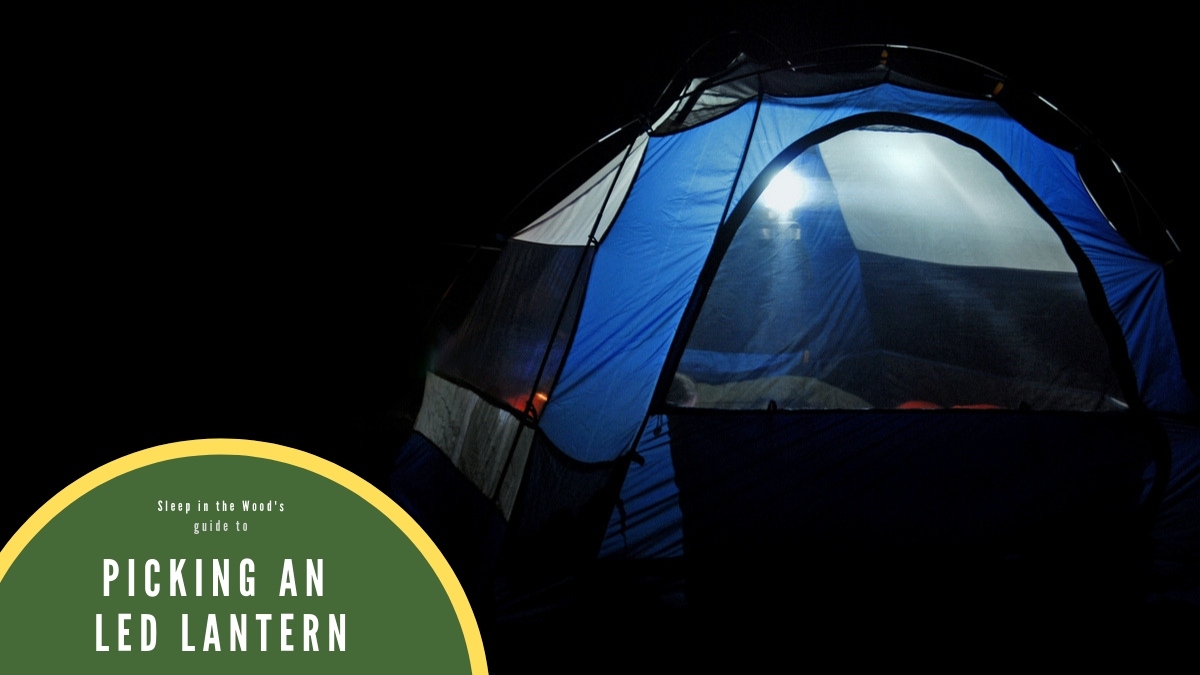 What is an LED Lantern

LED stands for Light Emitting Diode, which are tiny bulbs that give off a ton of light for very little power. They also don’t heat up like old types of bulbs.  So of course they have been built into camp lanterns. They use less power, so a handful of batteries can give you a reasonable amount of light for a long time.

Most LED Lanterns look similar to their kerosene brothers and sisters. Some form of battery is linked to the bulb behind a shield that helps diffuse the light inside of a housing that often has a hook or a stand.

Factors to consider in picking an LED Lantern for Camping

Here are some criteria that I looked for in picking a lantern for our camping adventures. Each has my own personal take on what I want in a category.

Bigger isn’t always better. As long as the lantern is big enough to throw the light you need, smaller might be nicer if less to pack sounds appealing. I want to to see a solid construction that is going to stand up to some thumping of the trail, not cheap and preferably as little plastic as possible.

That last is hard. Cheap and light often means plastic, so it was the criteria in this category that I most had to give on. I still looked for things that seemed solid and rugged, not cheap.

This list of LED lanterns are all battery powered and either have their own battery pack or run on AA/AAA batteries that are easy to find rechargable. There were so many interesting Solar powered camping lanterns that I made another list.

If you want a battery powered lantern, make sure you know what batteries it uses. Are they the standard AA’s or a power pack? If a power pack, how are you going recharge it?  If you are going to be hiking in the backwoods, needing to plug into a car isn’t going to be an option.

Note on Battery Types : For this list, I have discounted lanterns that only use D batteries. They are bulky and heavy. Rechargeable D’s aren’t easy to find. Overall, it just doesn’t feel like a reasonable choice for the modern eco-aware camper. AA’s or the 18650 batteries come in rechargeable varieties, so I am more ok with that.

Batteries are only as good as they last. Check what the stated battery life is.  It should be in a number of hours with a light setting. Higher settings will use more power. Depending on the time of the year you might need 4-6 hours of brighter light in an evening plus some time of dimmer light. This is going to vary depending on your style.  If you are the type to have a roaring fire going all evening, you may only need the lantern an hour or two. I don’t really like fire and smoke, so I expect to have the lantern going from the time the sun goes down until midnight or so.  Of course, know your own style.

In any case here, the battery life is going to give you an idea of how many battery charges (or replacements) you will need on your trip.

Power Packs and Recharging Other Devices : A number of these devices have pretty big batteries to run the light and as a convenience feature, the ability to charge your phone or whatever from them. Now I totally get that as a feature it sounds really good. I’ve seen enough people complaining how it only charges their phone twice and then the light dies. My feeling is that you need to use a lantern for light. If you have a USB charger of some form to keep the lantern topped up, then use that charger to charge your phone too. It feels a little strange to be shuffling power back and forth.

Use your gear however you feel, seriously. But know that using a lantern battery to fill your phone is going drain that battery. And batteries reach to charging differently. And if you are camping, do you really need a phone all the time?

Lanterns provide light, this is what their whole purpose is.  Make sure the one you are looking at provides enough light, ideally with a dimmer. Light is measured in lumens.  An old 60watt bulb puts out 800 lumens, but that isn’t going to feel the same in a campsite as it would in your house because the walls bounce that light around.  There are some factors to how the light from a lantern ends up helping you.
Distance reduces and diffuses a light. The further away you are the less lit up something is. Sitting the lantern on the table is going to light that table much better than hanging above it, but a hanging lantern will light the surrounding better.
Directed versus all around. A candle puts out 13 about lumens, but all around which is nice for general lighting, but not so good for reading. A 13 lumen flashlight directing all that light at the book would be a much different thing.

So what does this all mean? Like most things, it probably depends on what you need.  If you just need a lantern that keeps you from stumble in the dark versus something that would repel vampires.

In my research for this article, I tried to find a definitive thought on how much light you might need for camping. It’s the Internet, so everyone has an opinion and experience, but it seems like 100 lumens is a good amount of light for inside a tent with 200 or so being enough to light up a campsite.  For comparison, I looked up the old kerosene lamp from my childhood. The new models put out nearly 800 lumens and I remember that being blinding to look at directly.

Another thing to be aware of around the light is the color. This is measured on the Kelvin scale, but while great for science, the numbers don’t really mean much to me.  Essentially it is a way of describing the color of a light, from so white it is nearly blue to a more yellow’y light. I find yellow lights more difficult to read, but too far to the white scale can be quite harsh.  Some lanterns have a “red” setting as well, which is better for your night vision.

Does it have a handle that allows you to hang it high as needed? Are there magnets to stick to a pole? Is it handheld?  How easy it to use? Are there moving parts that could be tricky?

I think of having at least one light source per person.  Not everyone needs a big lantern, but you don’t want to be forced to stumble in the dark to the bathrooms because the main lantern is on the table. I like little personal light sources for each person plus one for the common area.

Is stargazing one of your favorite things? Then look for the red light settings.