I had never heard of Kings Canyon National Park before we started planning our massive camping trip. It was a tip from my parents. The park is administered together with Sequoia National Park in the southern end of the Sierra Nevada Mountains of California. Kings Canyon NP is a bit of a spangly shape amidst the Sequoia National Forest, so you cross the border several times. There are two visitor centers: Grant Grove near the park entrance and Cedar Grove a good 45 minutes of windy roads deeper into the canyon. We stayed in Cedar Grove for a few days and here is our experience. 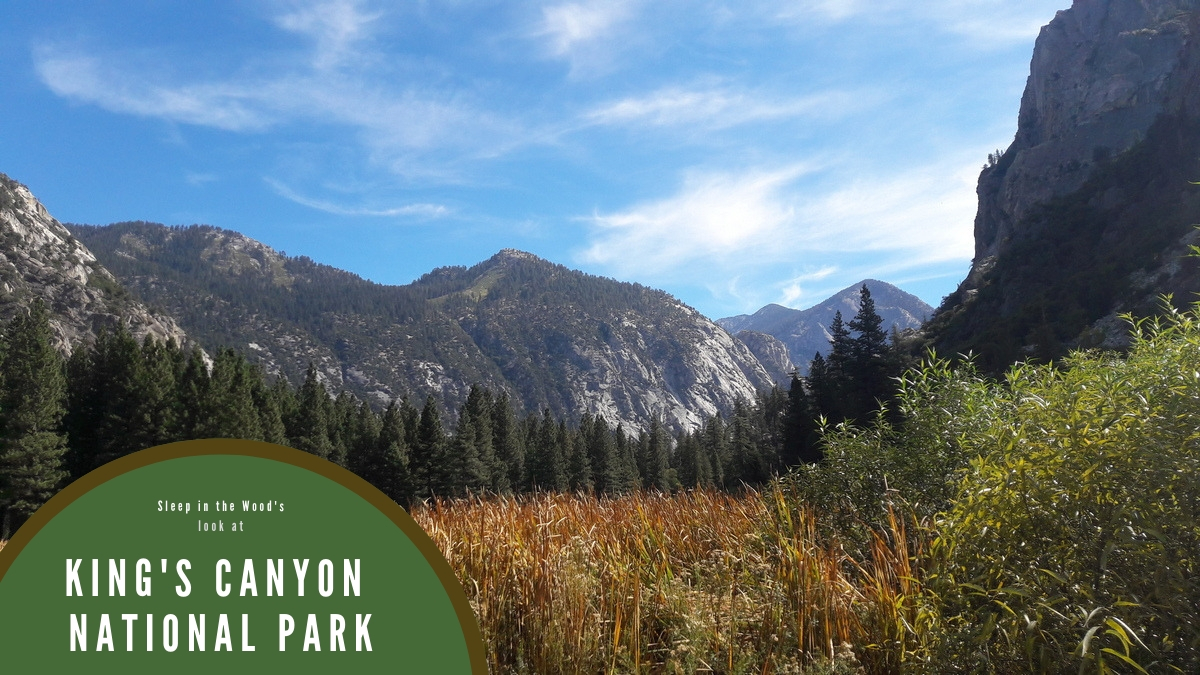 Which Grove in Kings Canyon?

The two centers of activity in the park are Grant Grove and Cedar grove. As their names suggest, these are forested bits, though they bracket high sierra lands with very few trees.

Grant Grove is your intro to the park. It is a grove of trees containing a large Sequoia named Grant. The visitor center is quite large with a store and restaurant. We stopped on the way in to get some advice, and the woman who helped us was so enthusiastic about the park. She pointed out a bunch of overlooks to see on our way inward. Along the main road are several campgrounds and the Grant Tree, which is really really big. Not as big as the Sherman Tree in Sequoia Park, but still quite a hefty amount of tree to see. There were several buses and tours. Before you get weirded out that the park is super crowded, head out toward the north and east.

Once you get out of the forested area of Grant Grove, the landscape changes drastically. Sweeping views of sheer rock cliffs and scrubby bushes line the windy road that heads toward Cedar Grove. This is the true beauty of the park.

Cedar Grove is a flat wooded valley at the eastern end of the canyon. Towering cliffs on either side of the valley give grand views, but allow for easy hikes along the valley bottom. Beyond Cedar Grove, at the end of the road, is a parking lot that serves as the trailhead for longer hikes in to the mountains. Cedar Grove is a cluster of campgrounds and a lodge with a few amenities. The tiny visitor center had already closed when we arrived in late September. The hotel, store, cafe combo was open though and enough for what we needed.

Cedar Grove is only open in the summer. We were there in September and things were beginning to wind down, but it was still going. Apparently the first snow will shut everything in the grove until the thaw.

The campgrounds are nestled between the main road and the river of the valley. We stayed in Sentinel Campground, which had flush toilets. It is the largest of the camping areas at Cedar Grove, and although not jam packed, definitely well used in September.

At the time we arrived, they were no longer taking reservations. So to check in….

I totally remember this from camping with my parents, but it was a far cry from the white board of reservations at Yosemite. 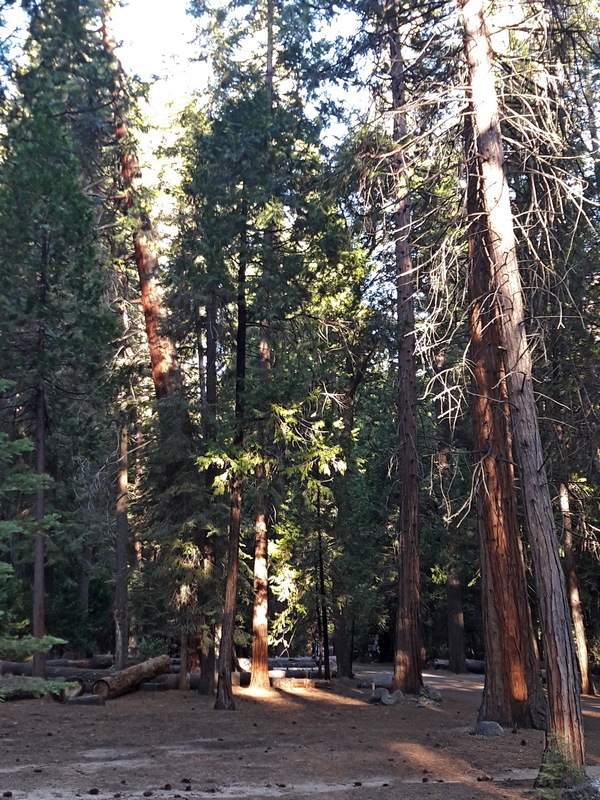 The campground is wooded with tall pines. Sites vary from heavily shaded to nearly open. Navigating the campground was a bit of a challenge with a network of interlinked one-way loops. We got a nice wide open spot with a concrete pad for the van. Our bear box was RIGHT THERE, not way over there, but convenient enough that I nearly forgot how annoying it was to have to lock up my food.

The “good” bathroom was only a few minute walk along a road and it had power. No soap (’cause of bears, duh!), but nicely lit even in the middle of the night. There were a few other bathroom buildings, but not all had power. It was clean enough for a campground bathroom. The lodge though had much nicer bathrooms, with hot water and soap and stuff.

Showers and laundry and soap, oh my!

Showers and laundry however were at the lodge, which was really only 100 yards across the access road. Pay your money for a handful of tokens, each of which gave 6 minutes of water. Woe to you if you put your token in before the first token ran out, because they only activate, not extend.

There are apparently two separate shower rooms, one per gender. But they were in the middle of renovation, so it was set up to be limited by gender based on the hour. I like to follow the rules, so I watched the laundry while my wife took her shower. Then as the hour was about to switch to “man hour”, a couple of women came to take showers. So in the end, since each stall is totally isolated, absolutely no one cared about the split. We all just dealt with it. ‘Cause camping!

Laundry was in the same building as the showers. Several washers and dryers took tokens and did a pretty good job of cleaning. I wasn’t really interested in leaving my stuff, though others definitely did. I watched the laundry as Ali took her shower.

The main lodge building has nice toilets. Camping has definitely given me a sense of what a “nice toilet” is. These were out of the wind, with SUPER hot water and soap.

Ceder Grove has a lodge, which contained a handful of hotel rooms, but also a small cafe and a small general store. The spread at the store was a lot of candy and soda, but some meat and sandwiches. Really, make sure you have plenty of food before you come. The drive to Grant Grove is about 45minutes (longer if you stop for views) and even their shop wasn’t enormous. Next town is quite a ways out from the park.

Grant Grove Visitor Center had a shop and a restaurant with a terrace.  We didn’t use it, but it looks on par with the center at Sequoia.

Ok, not technically in the Kings Canyon park, Grizzly Falls is on the road toward Cedar Grove inside the Sequoia National Forest. It is a parking lot and short walk to a small waterfall. There is a vault toilet here.

This water fall is in the Cedar Grove area on the south side of the main road beyond the campgrounds toward the Road’s End. A small parking lot right after a bend in the road is a bit hard to see from the west, but worth a stop. As its name suggests, this was a roaring fall with plenty of water coming through. We stopped in the morning on our way out, but if you were in the mood to wait the light would change during the day.

Along the road toward Road’s End from Cedar Grove is the Zumwalt Meadow. A parking lot at one end gives access to a nice trail which crosses the river and leads around the meadow to end at the Road’s End parking lot. The trail is flat and well maintained. In places it even is “paved” with wooden decking with seating areas that extend into the meadow. The trail does continue in a loop around the entire meadow as well, but that portion was closed during our visit.

The meadow is to be looked at and admired, but not walked through. The area is a habitat for animals and a wetland area that is easily disrupted by walking humans, so the trail keeps you out of that. Even still the views from the trail are great.  Since it is a wetland area, be ready for bugs. Clouds of gnats followed us during much of the walk. Ahh nature.

Mist Falls was one of the trails that I was interested in hiking during our visit here. I found it during some research and it looked easy enough, steep-ish in places but not impossible.  We parked at the Road’s End lot (great name) and ate lunch, then headed past the tiny ranger station out into the woods following signs toward Mist Falls.  Maybe it was just normal tiredness from not sleeping or some memory of the “steep” of Vernal Falls at Yosemite, but we felt burned out from about 15minutes of walking and turned back.

There were plenty of people around, so it is a popular trail, but it still felt more like a way through the woods than some of the more “formal” trails we had seen. It does look like a nice walk, so definitely check it out if your hiking ability is above ours.

There were supposed to be a few other trails around Road’s End, but despite signs, we were stymied. Oh well, it is all still really pretty. The trees snuggle the parking lot and mountains loom above.

The drive from Grant Grove to Cedar Grove along Highway 180 is supposed to be about 45 minutes, but it took us well over and hour both in and out of the park. First off, the roads are steep. The highway has both ups and downs, so you get steep no matter which direction you are driving. More importantly though, there are plenty of pullouts.  Many of them are only easily accessible from one side of the road or the other. Pulling across traffic to park or get back on the road isn’t much fun on such windy roads.

The landscape of the canyon changes along the route. The redish rock is quite common, but in places you drive around a bend and get a grand vista of dark gray or even green rock sticking from the hill. Canyon vistas open up from even a half mile of driving, so it is worth checking out a number of the overlooks. Junction View about 2/3 of the way from Cedar Grove on the way out is a sweeping view of the two canyons meeting up.